Setting up WALTR PRO is simple and when starting the application for the first time, file transfer on IOS needs an additional IOS application from the Apple Store named ‘Files by WALTR’. Also have the ‘iPhone’s TV (Videos) app’ installed on your IOS device as WALTR will transfer a converted video into its map. 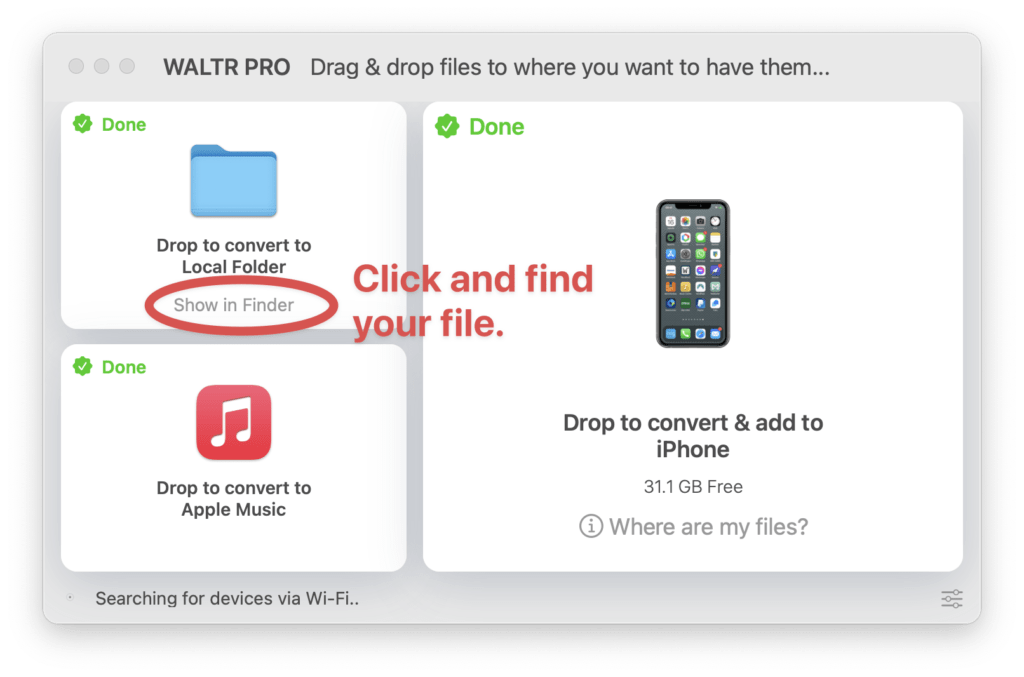 The interface and preferences are simple and fully support the ‘drag-n-drop’ principle. Its main use is its ability to transfer and convert files automatically.

WALTR PRO Any Format to Any Destination

At its core, WALTR PRO for Mac continues to deliver the easiest way of transferring files without any hassle. So if you need to get any file on iPhone, forget worrying about compatibility. Here’s how it works:

WHY MAKE USE of WALTR PRO

WALTR PRO is an iTunes (or Finder for macOS ) alternative making file transfers easy, especially after Apple discontinued the iTunes application. WALTR Pro enables you to transfer various kinds of files to your iPhone, iPad, or iPod from your Mac or PC.

You do not have to worry about the original file being in an incompatible format as WALTR PRO automatically recognizes and quickly converts it into a format fully compatible with iOS and iPadOS.

The entire process is swift and effortless.

In the above steps, we saw how to transfer an unsupported file format after conversion. But what if you have files that are already supported by iOS. Well, WALTR PRO being an iTunes alternative, handles this as a cakewalk.

Let us take songs (mp3) as an example.

All sounds great but what if you want to:

WALTR PRO offers a list of compatible apps for the particular file. Here is how.

After receiving numerous requests from pro users, WALTR PRO provides the ability to manually edit cover art and metadata. Simply drag & drop the files while holding the Alt (⌥) key or Command (⌘)key and gain full control of the way your media looks. Sometimes we have to deal with an incompatible video or unsupported format by iOS or iPadOS (for instance .mkv).

WALTR PRO will quickly convert the ‘mkv’ files and put them inside your iPhone’s TV (Videos) app. All this happens without any noticeable loss of picture quality which is great of course!

WALTR PRO can transfer your song collection to your iPhone. After transfer and/or conversion they will show up conveniently inside the iOS Music app.

With WALTR PRO, you can locate songs in my Finder and drag & drop them onto the ‘Drop to convert & add to iPhone’ section.

If the music format is unsupported by iOS, WALTR PRO will convert and transfer it for you.

3. PDFs, books, and other documents

The Apple Books app on my iPhone and iPad do support PDFs. However you can also transfer all PDFs and documents using WALTR PRO to third-party apps. WALTR PRO provides the option to choose which app to transfer the file to.

WALTR PRO for Mac review. WALTR PRO is a truly neat application to keep your audio-files, video’s and data fully compatible with IOS. Its transfer and conversion process is fast and simple. The ability to use a wanted third-party application for file use, is a great bonus. I love the simplicity as anybody can use this extraordinarily well-designed app. The interface is super neat as you have just three blocks. Its not expensive and can save any IOS, Mac user a lot of time keeping their data compatible and make file transfers a piece of cake.